Launch is the big moment we’ve all been working up to. In some ways, it’s straightforward: the students hit the button and their projects go live. It’s the most essential part of the course, because nothing else happens if the project isn’t launched. As instructors, we don’t care about a 100% success rate for the projects, but we do everything in our power to ensure a 100% launch rate each year.

For the students, launching on time is the biggest challenge because, by this point, they are exhausted and anxious. They are overwhelmed with "what if"s that tempt them to drag their feet and stall however they can:

We used to underestimate how hard this really is for students, especially those who have never taken a similar leap before. At the moment of launch, it’s too late to address the irrational fears that might derail the process.

What we have to do, instead, is to make sure they feel adequately prepared and supported ahead of time. A lot of the process we’ve been describing up until now has been put in place to deal with these anxieties in a systematic way, well before the moment of launch.

This was a big realization—it took us a while to realize that we needed a multi-stage rocket to get them into orbit.

One final thing we do to ensure everyone launches on time is that we launch together, as a class. Everyone hits the button at the beginning of class and then we celebrate with pie.

Once launched, the campaigns run for a full two weeks—we believe that this is sufficient for a well-scoped campaign.

# Getting anyone to care

Now comes the second biggest challenge for the students: getting anyone to care. This has gotten much harder in 2019, when everyone's social media feeds are an unrelenting torrent of breaking news and crises.

In fact, whether anyone will care is mostly already out of the students' hands by this point. Did they make something people want, or simply something they wanted? Did they talk to the right people? Did they incorporate feedback? Did they find allies and build credibility? Once the project is live, we find out the answers to these questions together.

What they can still do, however, is hustle for attention. We prefer to show them how to do outreach rather than marketing: how you make a signal people want to share, how to ask for help, what success looks like. A huge part of it is normalizing the notion that asking for help is necessary, and not shameful. We can’t expect everyone to know what we’re doing and why; outreach is about taking the step to tell people. 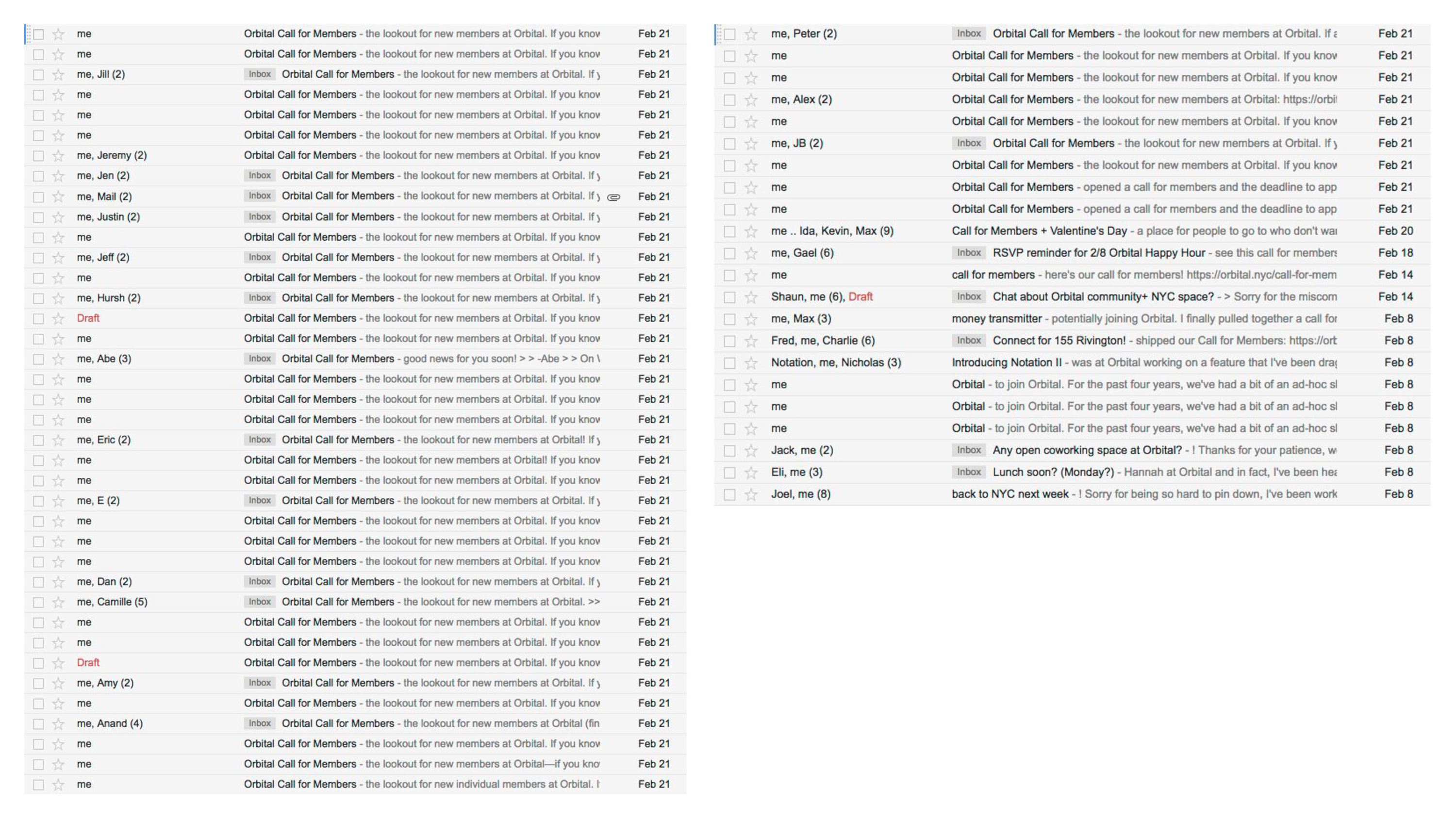 At some point, you just need to send out all the emails.

We help them understand that over the course of the semester, they’ve grown their networks and gained credibility by working in public. They have new relationships, and these are people they need to specifically ask to support them.

For the most part, the campaigns run like you’d expect. There's a bump of initial interest, followed by a bit of slog (which we refer to as the "valley of despair"), and finally perhaps a bump at the end.

For the students, they are fully living in the sea of uncertainty, which can feel terrifying. 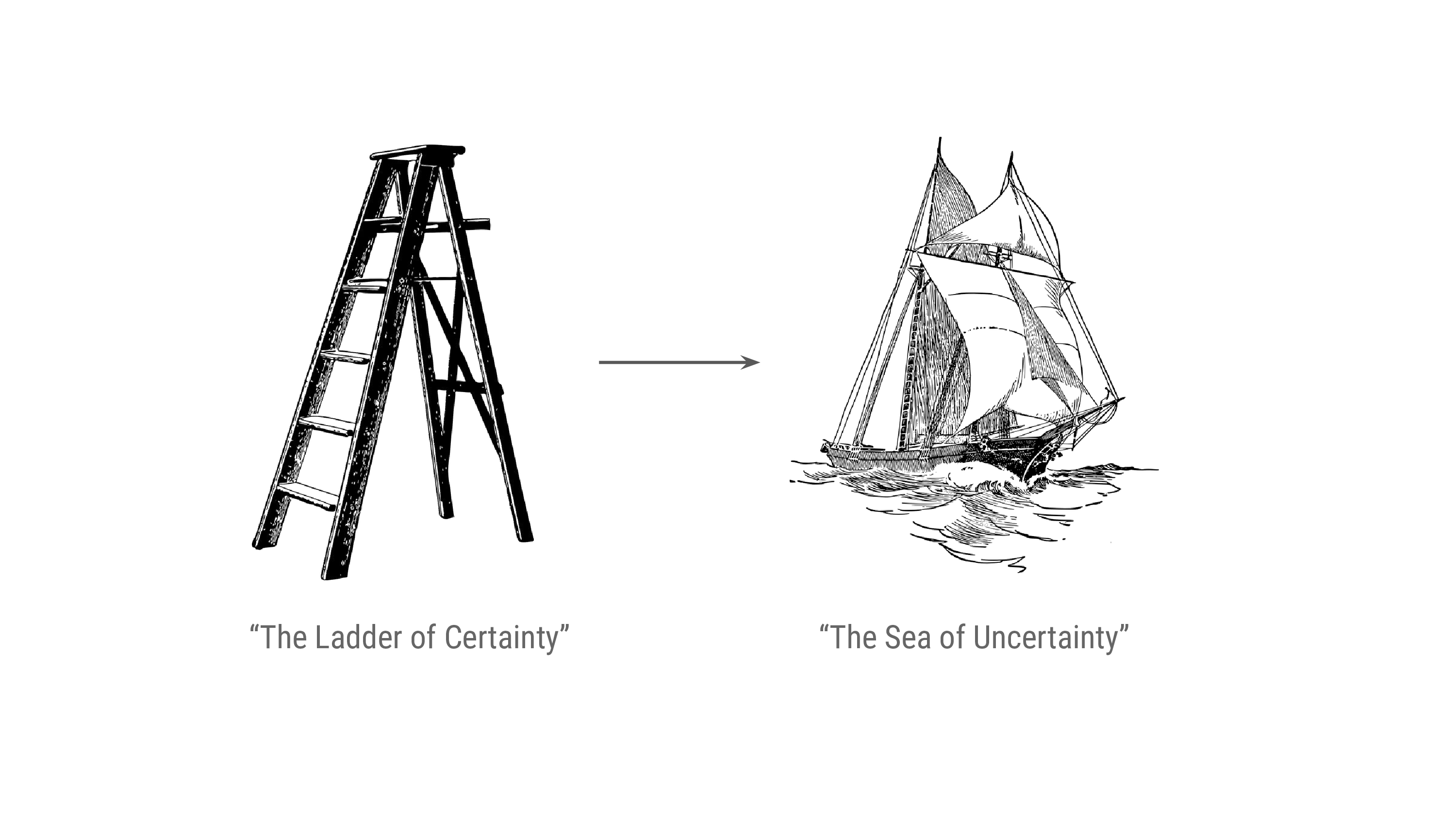 Up until now, we were taking them through the training program, but now they're the ones driving. Everyone will have a different experience, and if they hadn't realized it yet, they are now definitely confronting the fact that not even we, the instructors, can tell them what the "right answer" is for what to do next. 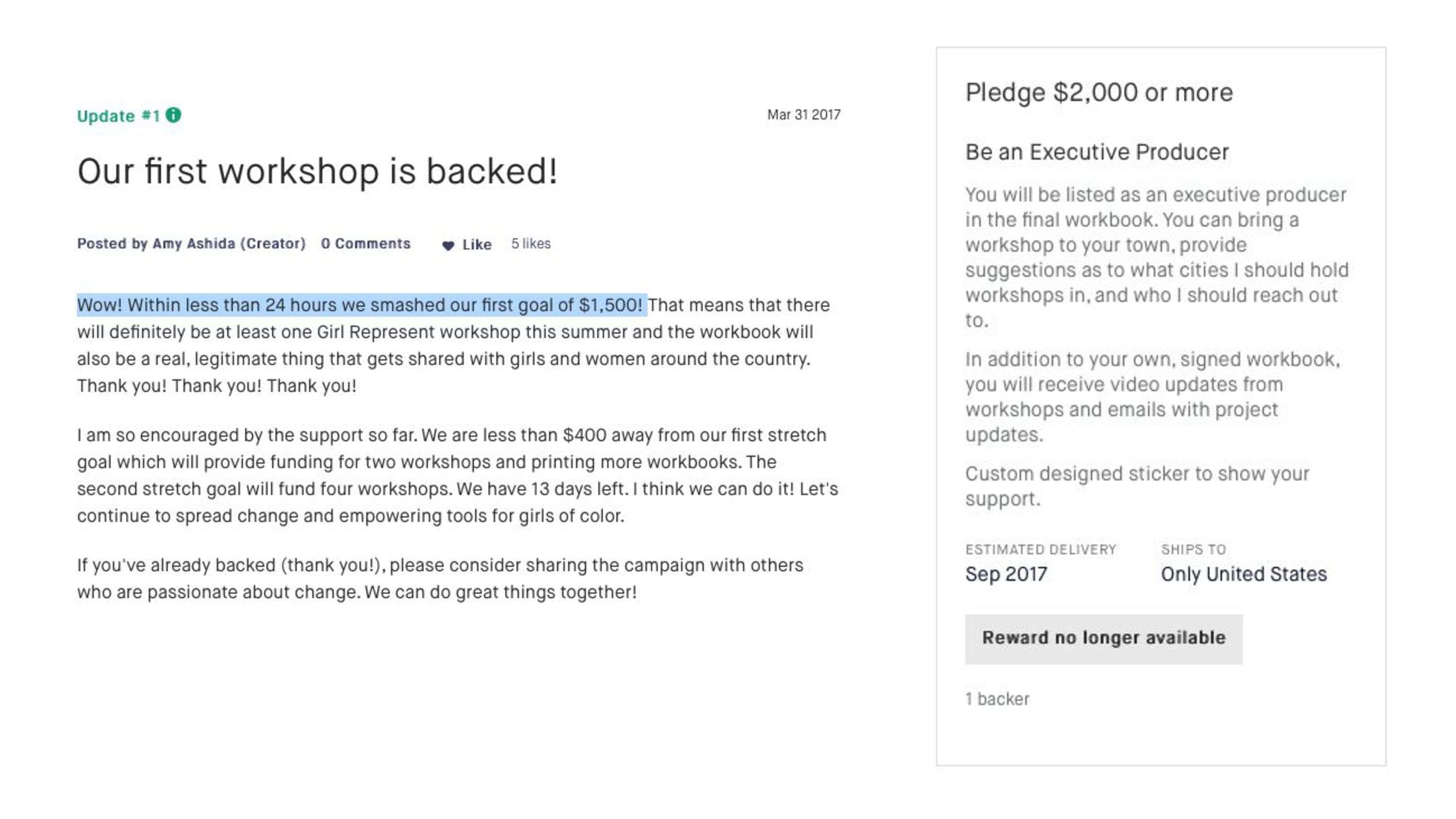 Amy Ashida's Kickstarter update after getting $2,000 from one donor within less than 24 hours of launch. 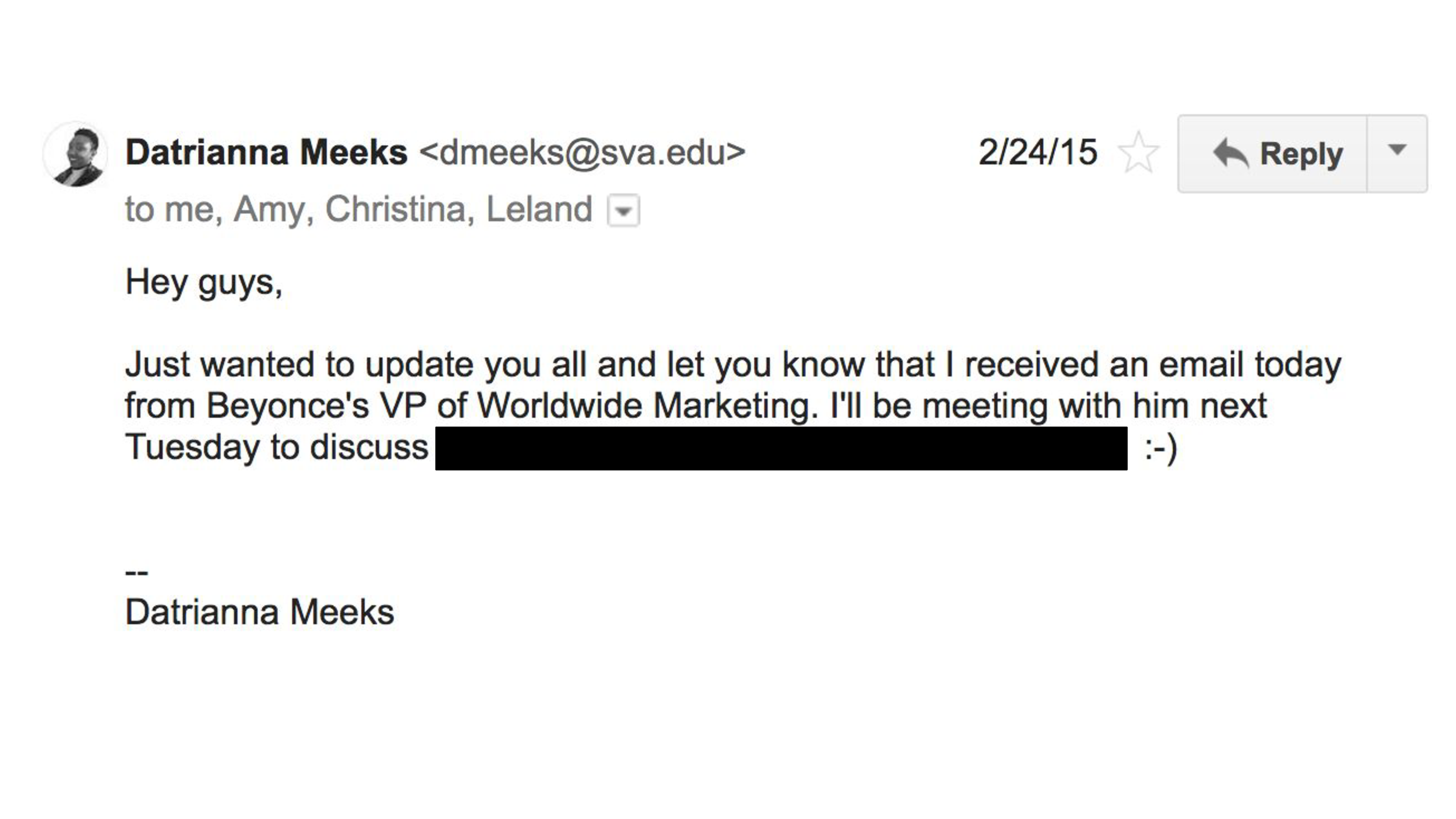 Datrianna Meeks got an email from Beyoncé. 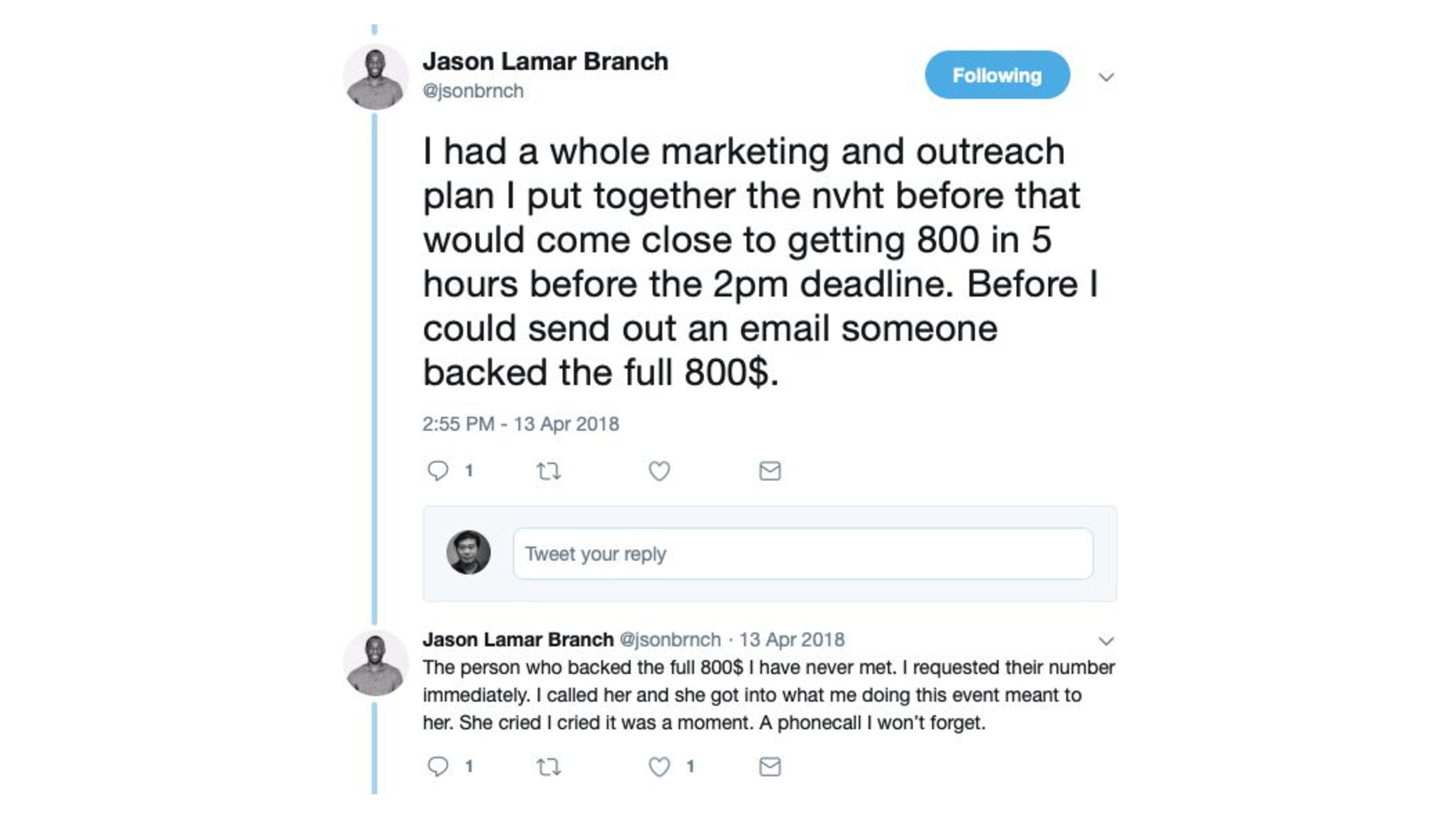 Part of Jason Branch's Twitter thread about how his project crossed the finish line.

This is the unique experience we want them to have—the kind that we believe we can't create through other types of instructional models. They are now learning through experience, and those lessons are so much more meaningful and lasting than anything we could have imparted via a lecture or a Medium article.

Here, described in our students' own words, are some of those lessons:

"it was moving how many people backed it for no reward, they just wanted it to happen for others."

Validation is an inexplicably powerful, emotional thing to receive, and necessary for maintaining stamina on the journey of creation.

“The kindness and support from collaborated photographers is definitely the most surprising part of the project. They have continuing communicated with me and provide photos and suggestions along the way."

The environment affects outcomes—none of us are creating in a vacuum.

“When I helped my dad to donate on Kickstarter I realized how complex it was for someone that doesn't know English to use the site, so I decided to change my outreach by outlining all the steps Brazilians needed to follow to make a donation. After that more Brazilians started donating."